Ahmedabad Alive, an introduction to the cultural complexities of a 600 years old city of western India, brings alive Ahmedabad’s unique culture that has managed to survive amidst some of the worst natural disasters and social discord that India has ever witnessed.

As the protagonist navigates through the city in search for answers to her father’s mysterious past, strangers become friends and the city becomes home. What follows is a series of encounters with harsh social realities, some heart-warming and hilariously poignant experiences with the local residents, auto drivers, and shopkeepers, and never ending political debates with her friends. The illustrations bring to life the essence of the city in all its vibrant colors and architectural marvels. The bazaars, streets, and railway platforms that provide the space for temporary co-existence get transformed into comfort zones of shared chai and hilarious anecdotes. The beauty of the walled city, the spirit of garba, the love for fafda-jalebi, the intricate stone carvings of the jaalis, and the stories of the local people, all come alive through the journey of the protagonist.

To tell the story of a city with a history that is over 600 years old is an ambitious task, more so when the final form is a graphic one. I began by devoting the first 4 months of my time doing research on the city to understand what it was that I could focus on. The research began with extensive field study, interviews of established academicians, businessmen, scholars, activists, artists, and also local residents, street vendors, and workers. I dug through books and articles at various libraries that I had access to. These readings provided me with insights into the intricacies of life in Gujarat in general, and Ahmedabad in particular, and helped me understand the essence of the city. Graphic novels spanning different periods and genre were carefully studied to understand how text and image work together. Most importantly, my own experience of living in the city for over four years provided me with anecdotes that became the foundation of a lot of ideas that are directly or indirectly introduced in the text. 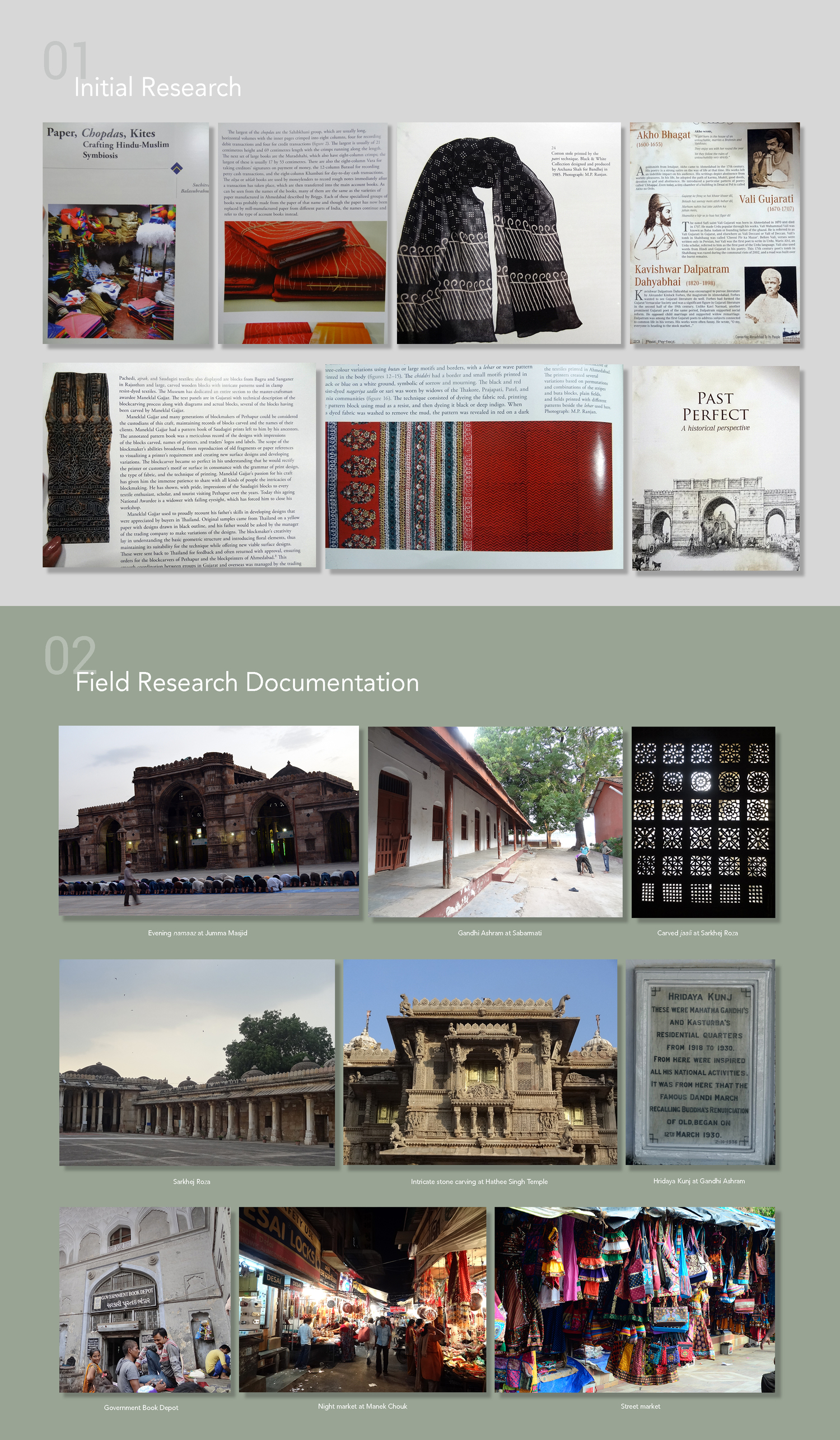 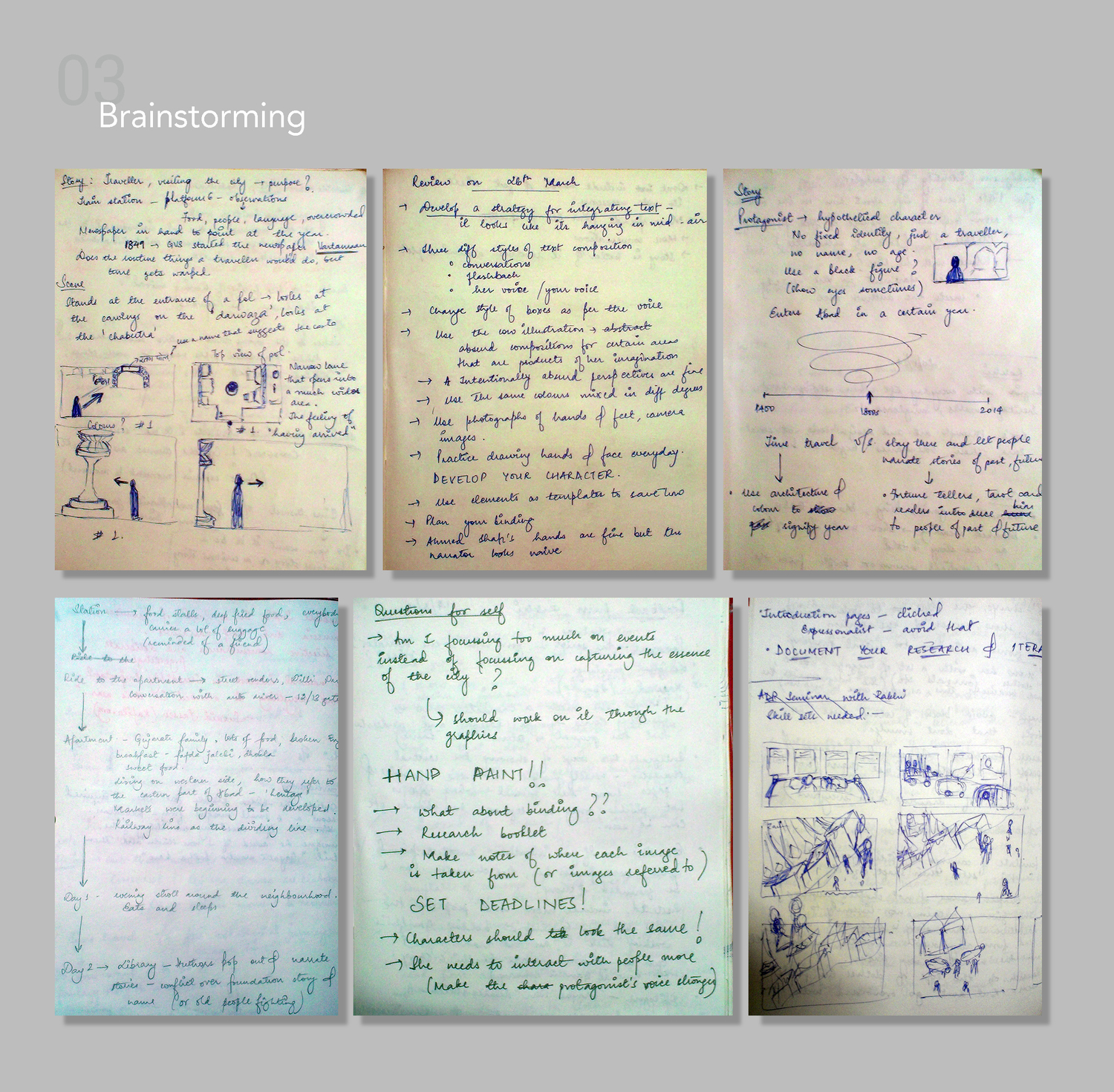 After the initial research and series of field visits, the biggest task was to compile all the information gathered from various sources. I wanted to refrain from using a linear narrative which could make it feel like a history text book. I started looking for common threads in the story that could allow me to think of the city in terms of overarching themes. I began by creating a timeline of Ahmedabad starting from 1411, which was the year when the city was founded, to the present time. This helped me understand how some of the present day issues could be traced back to events that happened much earlier, and allowed me to identify themes that deserved most attention. 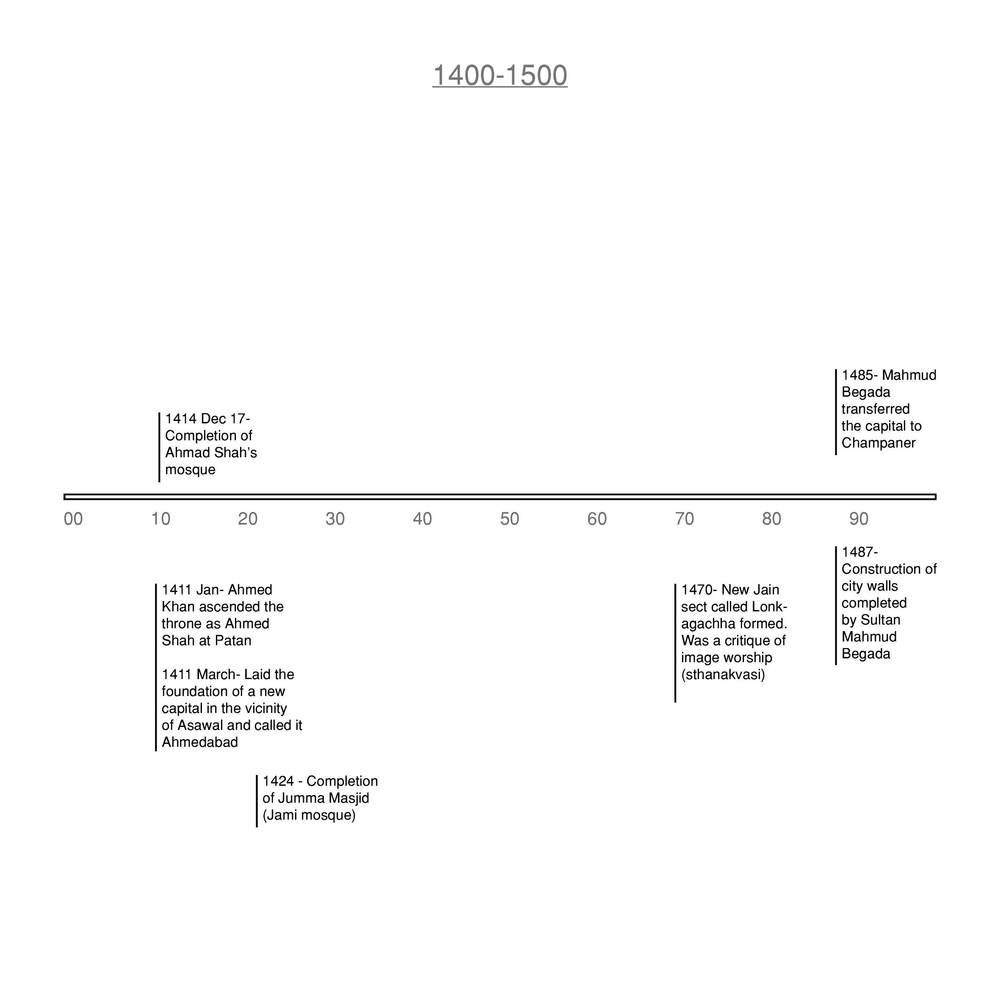 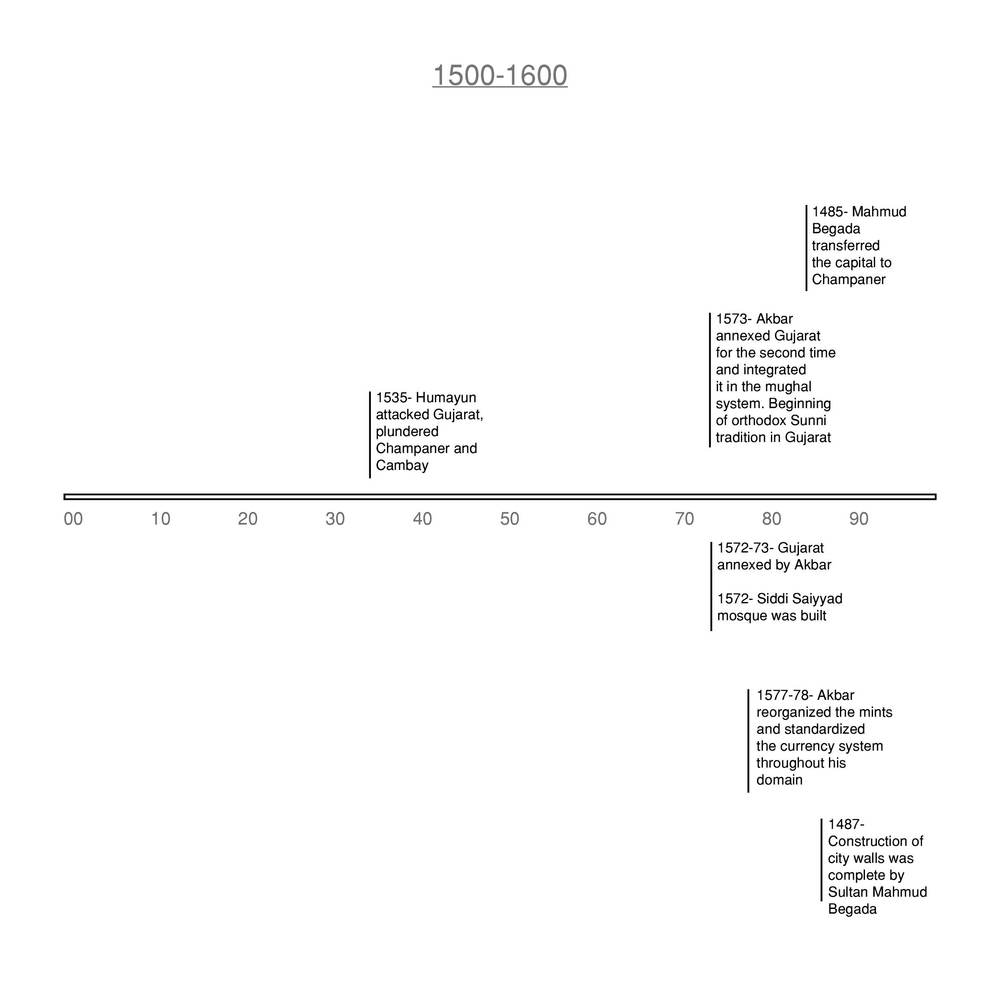 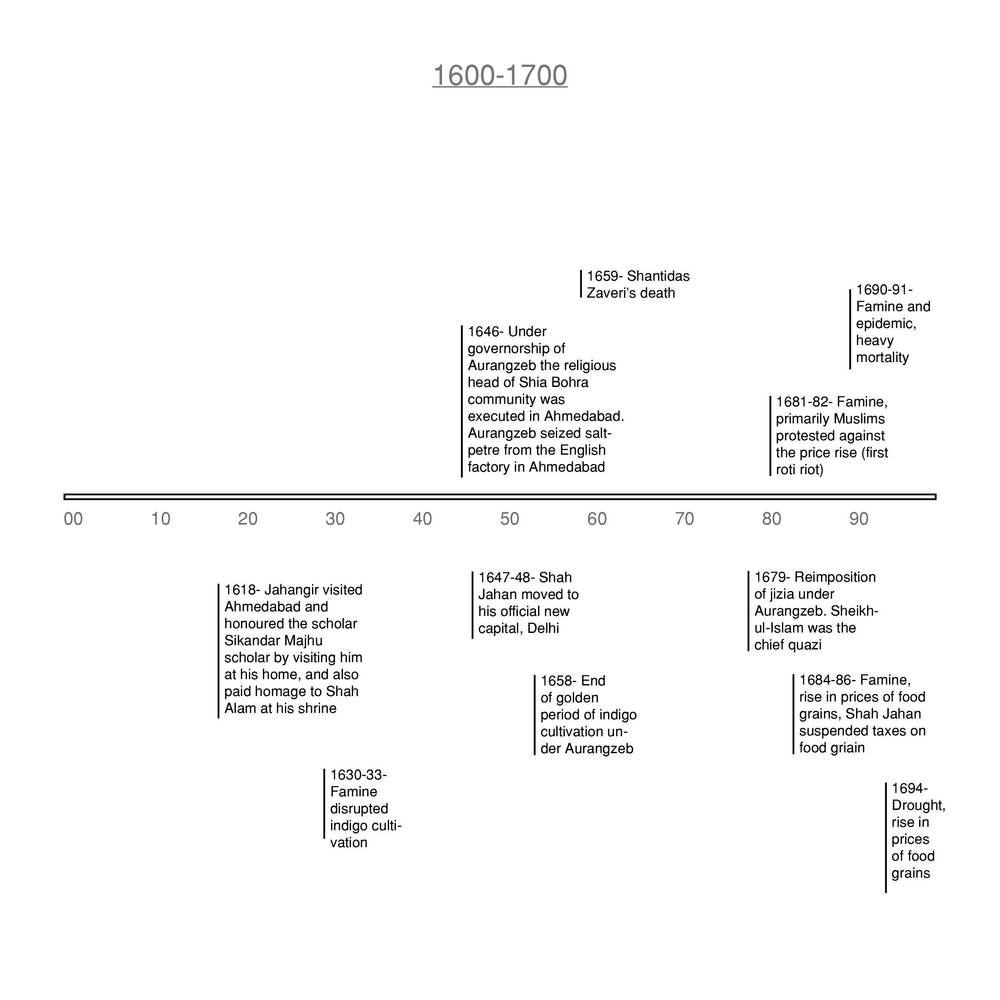 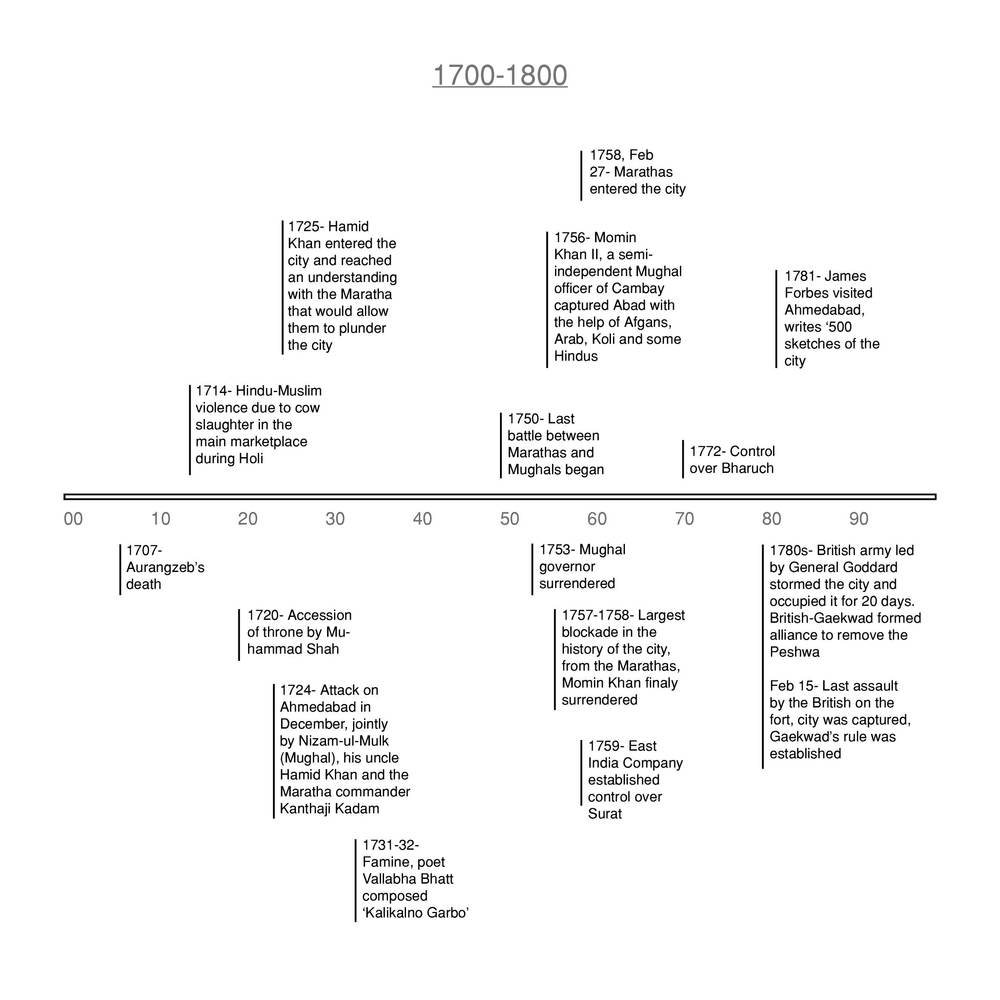 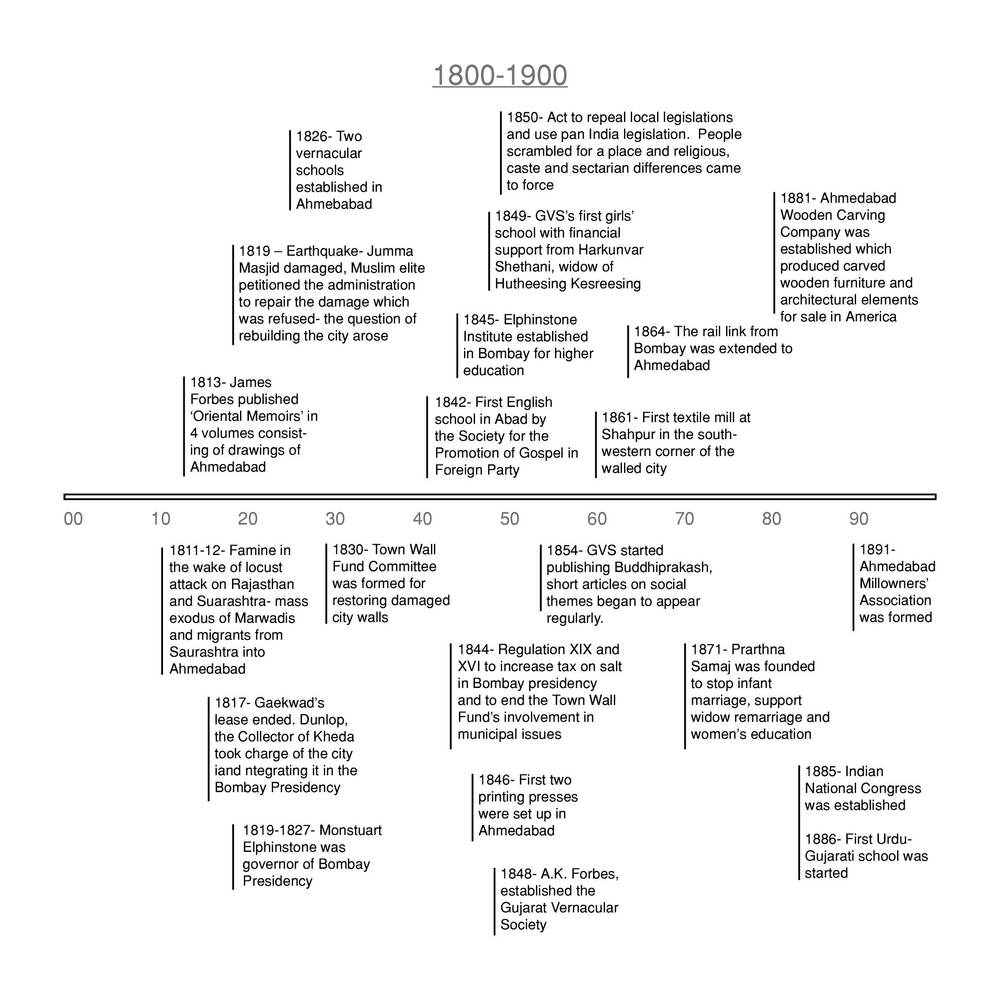 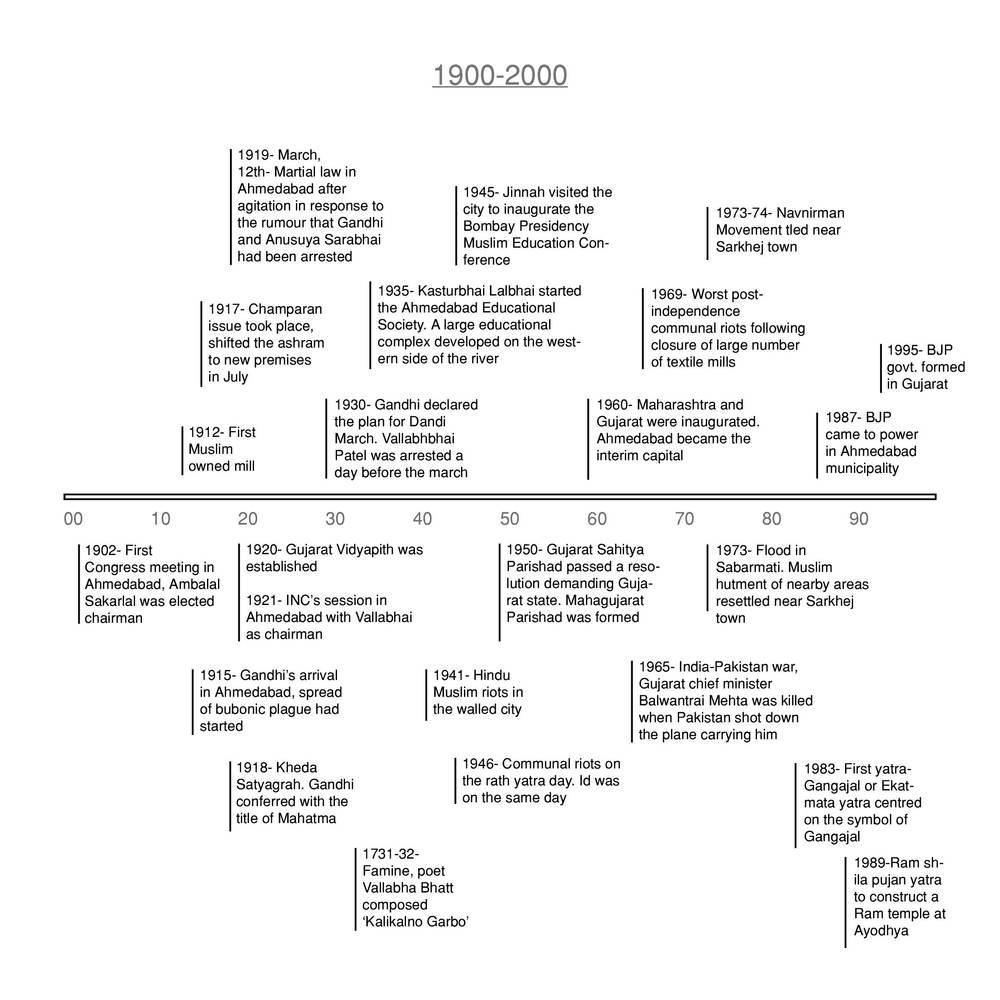 My biggest challenge was to device a way of telling a story that spans a period of more than 600 years, through characters that are set in a specific time. I chose my protagonist as a female traveler who could narrate the whole story. I decided to set the story in the 90s which hangs somewhere between the lingering memory of the aftermath of the 1969 religious riots of Ahmedabad and the yet to occur tragic events that led to the religious riots of 2002. This was the time when the city was undergoing several changes- Muslim families in the city were beginning to move to the western part, the textile mills that once drove the economy of the state had long been shut, and the feeling of insecurity between different religious communities was growing.

The protagonist, whose identity is never revealed, travels through the city in search of answers to her father’s past and in turn comes to unravel some mysteries about the city. The voice of the protagonist, her father, and her grandmother, all demanded distinct treatment both visually and textually, and I had to be aware of that during the scripting process.

I experimented with various types of illustration styles- including fully hand done illustrations, partially hand drawn and then digitally rendered, to fully digitally drawn- and also tried using textile motifs to create architectural forms. I finally painted all the illustration by hand using acrylics and water based paint as they expressed the feeling of an old city best, then edited them digitally, and finally added the text in photoshop. 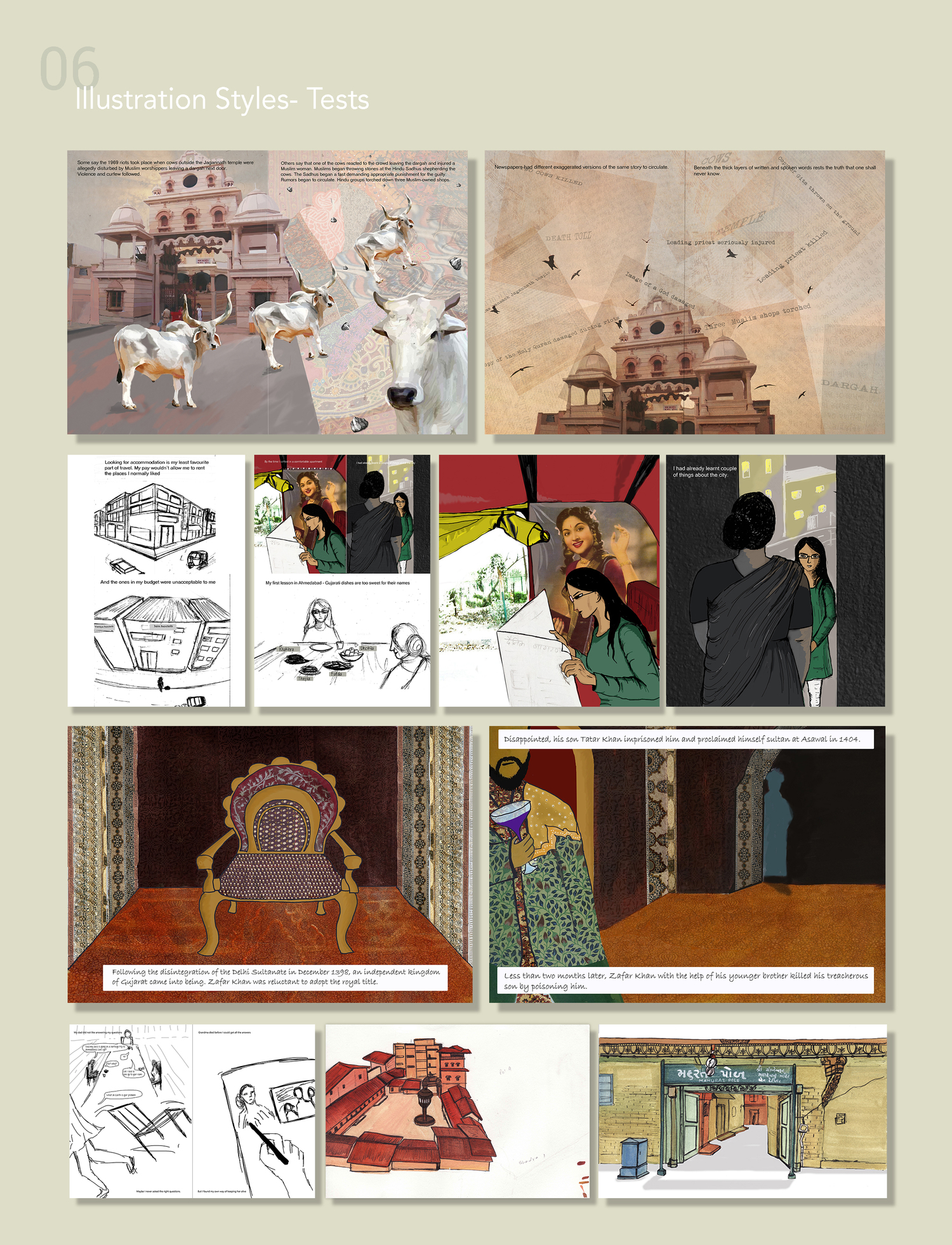 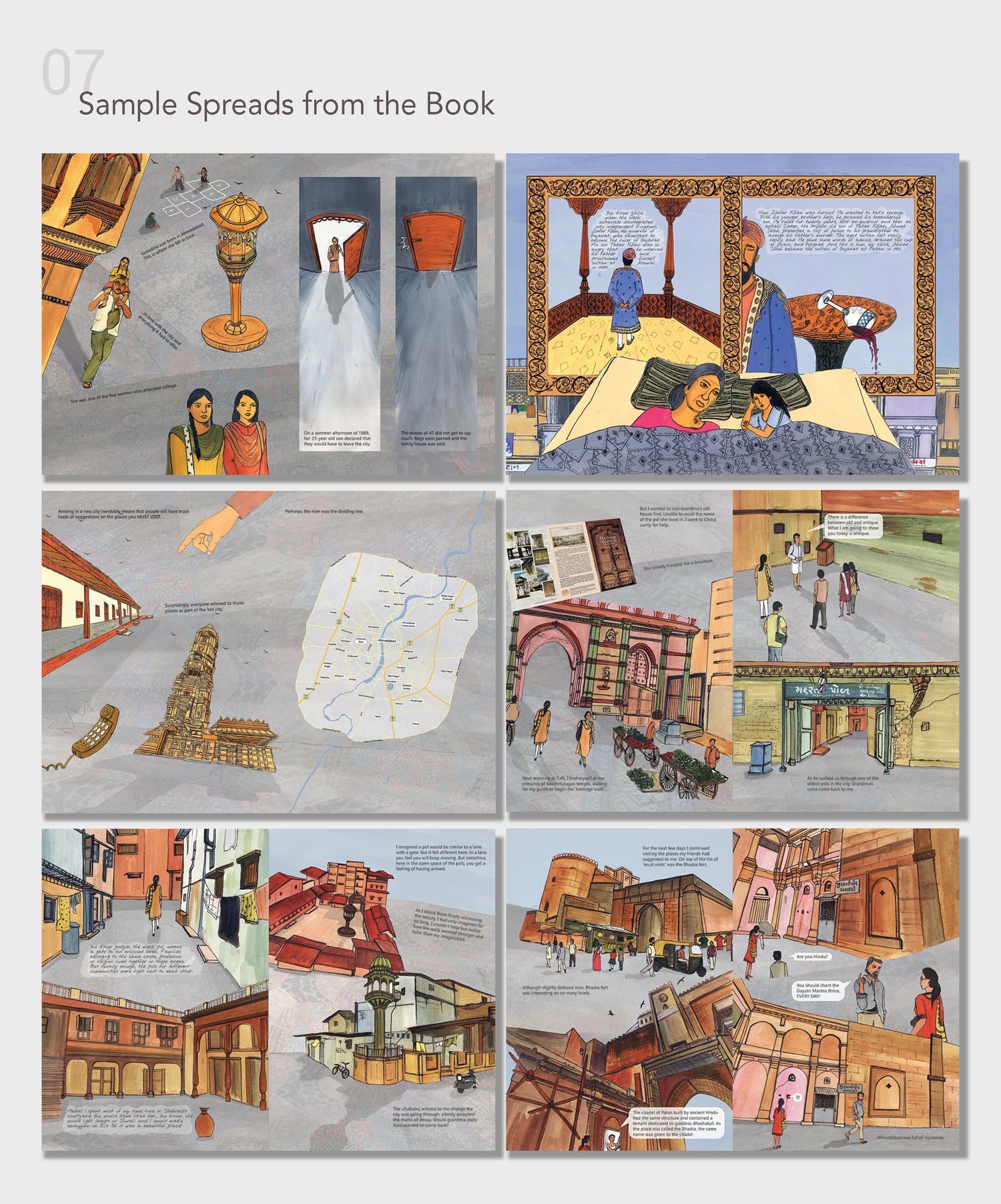 Let’s make something together, say hi.